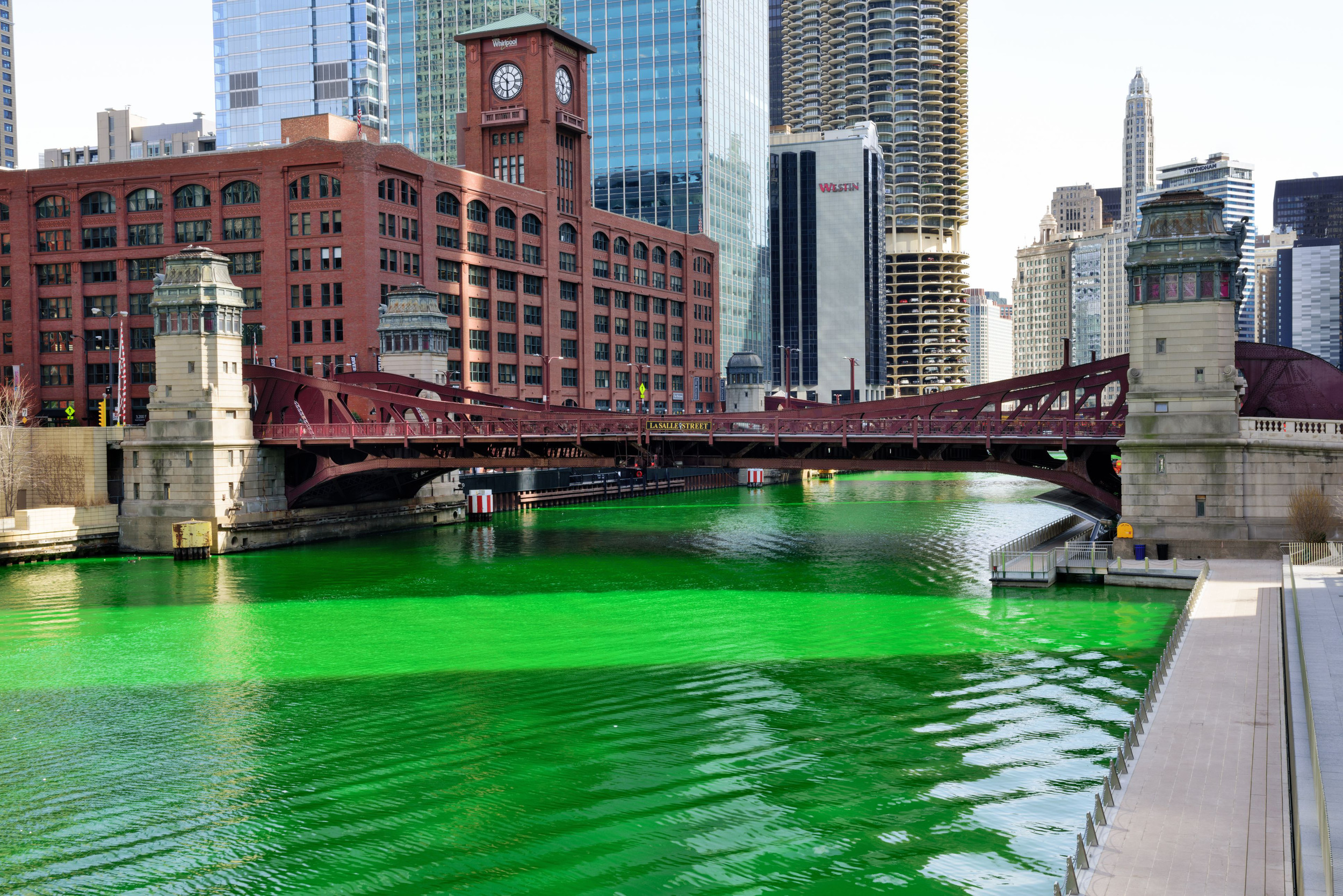 Top of the mornin’ to ya, readers!

We’re approaching a big holiday in Chicago: St. Patrick’s Day. As Chicago’s Bank®, just what does this celebration mean in our hometown, and what can you do to celebrate? We’ve compiled a list of essential information for locals and tourists alike, so everyone can be Irish for the day.

Please note: While St. Patrick’s Day is officially observed on Tuesday, March 17, 2020, most festivities in Chicago are held on Saturday, March 14, 2020. We suggest celebrating both!

If there’s one classic Chicago sight to see, it’s the river dyed green. Outside of the Emerald Isle, such a unique and eye-catching tradition can’t be found. From 9 to 10 a.m., boats patrol the Chicago River, releasing neon green dye into the water. Don’t worry, it’s entirely eco-friendly. But, it only lasts for a few hours, so it’s best to get there early to see the full effect.

The renovated Chicago Riverwalk is the perfect place to see the water up close and take a picture. There are several bars and restaurants that open early for the festivities on the river level as you walk by. Cruise boat tours and personal boats keep the river busy and reinforce the shocking Wizard of Oz green hue. It’s always a fun time with people waving from shore and music coming from the boats.

You can also catch a great view of the green river from one of the street-level bridges. Traditionally, you can find the brightest green hues in the river from Columbus Drive to Wacker Drive.

For more information on the river dyeing, click here.

Your best bet is usually to see the river dyed first and then to head over to the parade, which steps off at noon at the intersection of Balbo Drive and Columbus Drive. It proceeds north on Columbus until Monroe Drive, with a viewing stand in front of Buckingham Fountain. Opposite the public viewing area is the VIP grandstand where, for $50, you can get a seat on the bleachers and an up-close view of the floats. It’s also the closest spot to hear the emcee.

Plus, watch for some special additions because 2020 marks the 65th anniversary of the Chicago St. Patrick’s Day Parade. To honor the big milestone, this year’s theme is “65 Years of Love, Loyalty, and Friendship.” It’s a well-attended tradition that includes an honorary grand marshal, parade queen, and emcee.

Be sure to watch for the 2020 Parade Grand Marshal, Fr. Thomas Hurley, Pastor of Historic Old St. Patrick’s Church. The Parade Queen will be Kari McClowry, and she will have her Queen’s Court supporting her. The parade also has two guests of honor from Gaelic Park and the Irish American Heritage Center. These are both iconic Chicago institutions, one on the South Side and one on the North Side. It’s a nod to the diverse neighborhoods and rich history of the city.

During the parade, keep a lookout for some special Chicago favorites, including the Shannon Rovers Irish Pipe Band and Sheila Tully Irish step dancers. The city’s elected officials will also be making an appearance in the parade, along with representatives from local businesses, Irish organizations, and schools. Plus, the emcee always adds a special touch of charm.

As locals, we want to be fully transparent about the sheer number of people who attend these downtown events. Hundreds of thousands of people turn out for the river dyeing and parade, so it can get crowded quickly. Michigan Avenue usually shuts down due to pedestrian traffic, and public transit can be packed. But, don’t let this deter you from attending. It’s a joyous and festive crowd, but it’s also good to be prepared.

If you’re meeting people downtown, be sure to have a clear meeting spot away from the main hotspots of Grant Park, Michigan Avenue, and Wacker Drive. Even choosing a side street makes it much easier to find your group and not get lost in a sea of green. Also, because of the crowds, be aware of your surroundings. Don’t let a leprechaun sneak up on you!

Where to find the locals

While you may hear some Chicagoans grumble about the disruptive nature of the weekend, deep down they love the excitement and spirit St. Patrick’s Day brings. There’s nothing like singing “Danny Boy” with newfound friends and relishing the citywide pride seeing everything decked out in green. That being said, you’ll probably find locals with a Guinness or Green River soda at a corner pub rather than in the middle of Michigan Avenue.

May the luck of the Irish be with you, Chicago. Sláinte!

Related Topics
July 16, 2020
Caravans, peace grants and basketball. Finding ways around the pandemic to keep children and others safe in Chicago this summer.
by Annie Sweeney and Sophie Sherry
March 13, 2020
Discussion: The impact of basketball
January 16, 2020
How to brace yourself for a Polar Vortex 2.0